Since 2015, the European Union has provided Greece with a total of €3.38 billion to address migration and border challenges. 2.53€ billion has been drawn down by Greece to date.

The European Union's support to Greece is provided through three pots: the Asylum, Migration and Integration Fund (AMIF), the Internal Security Fund (ISF) and the  Emergency Support Instrument (ESI). The largest pot is the AMIF, through which a total of €328.3 billion has been made available. This budget item supports EU member states for the purpose of efficient management of migration and the implementation and strengthening of the Common European Asylum System. The ISF provides money for the management of visas and entry, control of external borders, but also returns, for example through Frontex. Here, Greece has been allocated €320 million. The ESI provides support for emergencies and gives money for humanitarian aid, the share was 668.9€ million. Most of the regular money from AMIF, ISF and ESI goes to the national authorities, that is, to the Greek authorities dealing with migration and asylum, such as the Greek Ministry of Migration and Asylum. 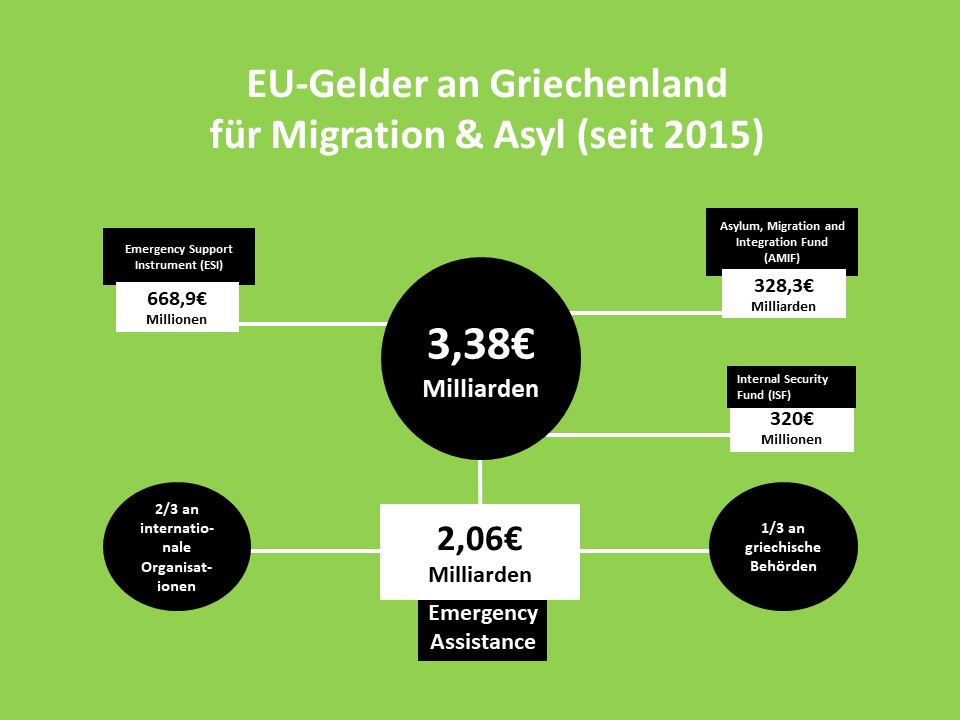 In addition to the regular requirements, funds can also be mobilized from AMIF and ISF for other short-term emergency needs ("Emergency Assistance"). In the case of Greece, the Emergency Assistance funds represent the largest sum of all the funds that have been mobilized. 1,54€ billion. Two thirds of all Emergency Assistance funds have gone to international organizations, the last third to the Greek authorities. It is important to note that a total of €2.06 billion has been made available, but Greece has not drawn down all of it.

Political will for good care is lacking

In fact the Greek authorities received 2,53€ billionto cope with the increased number of arrivals in recent years. In this context, it is particularly important to note that 3.38€ billion awarded were made, but a large part of it was not spent. This clearly shows that the funds available are necessary to provide adequate and dignified care for refugees on the Greek islands and on the mainland, but the political will is missingto implement it in this way.

Basic requirements of the EU Reception Directive are still not being met in Greece, such as the right to education for children. The provision of food is also still problematic and inadequate. Enough money would actually be available to solve the problems in the long term. Even the European Court of Auditors as the EU's own authority, came in its Annual Report 2019 reached similar conclusions, without explicitly naming them as such. There was no explicit misappropriation of funds, but some funds from Emergency Assistance were misappropriated for longer-term projects and structures, although they may only be used flexibly for short-term emergency needs. In addition, the ACA criticized the inefficient use of the funds and thus the Discrepancy between EU targets and actual results – in other words, the lack of political will. Now, the money is not only going to the Greek authorities, but also to international organisations. But even more money to international organisations is not necessarily helpful if the Greek government does not support their work. blocked and criminalized, as is the case especially on the Greek islands.

If you would like to take a closer look at the money that has been budgeted and paid out, you will find here is an overview from the European Commission. It also presents how much money went to the different international organization as well as to which Greek authorities.

Looking at the numbers makes one thing very clear again. The state authorities and organizations actually have enough resources to treat people with dignity. But it seems to be politically not desired.