Since the beginning of 2018, the EU has provided Bosnia and Herzegovina with a total of around €89 million for flight and migration. With the money should, according to the EU Commission provide humanitarian assistance to refugees and support the Bosnian authorities in migration management.

This money also includes €3.5 million made available additionally by the EU Commission at the beginning of Januaryafter the camp in Lipa burned down and hundreds of people were left homeless at the mercy of the winter in the Bosnian mountains. The money will be used for warm clothing, blankets, food and health care. The money will mainly be used to support aid organisations such as Save the Children or the Danish Refugee Council. The Danish Refugee Council, for example, used parts of the funds to important reports on the violent and illegal pushbacks through Croatia to Bosnia-Herzegovina to create.

In view of the terrible situation in Bosnia, some people are now asking what happened to the money. Deutsche Welle also reported on the topic.

This is where the money goes

However, most of the money goes to IOM in Bosnia and Herzegovina. IOM has received a total of €76.8 million from the EU since June 2018, of which €51.6 million had been drawn down by the end of 2020. This left €25.3 million at the end of the year. The IOM homepage also lists the allocation of funds. I will list the most important points here again. 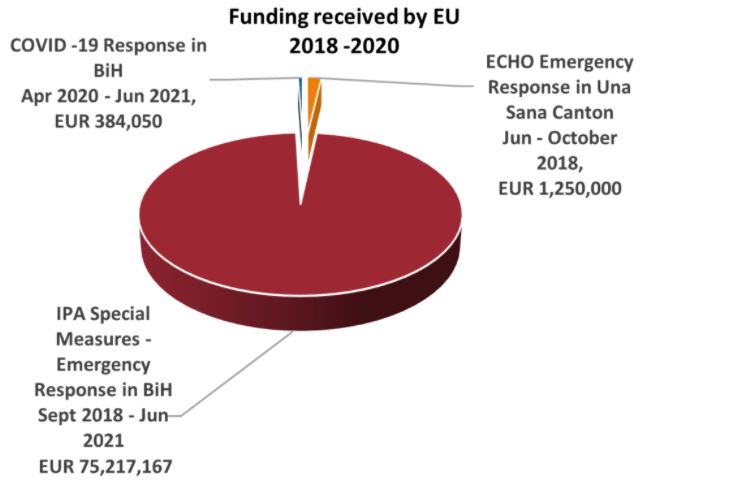 On this graph you can see that a large part of the funding comes from the IPA.pot. In addition, funds for a response to Covid-19 in Bosnia and Herzegovina have also been allocated to refugees so that they are not defenceless against the virus. In view of the cramped conditions in the existing warehouses and the very close proximity of bunk beds However, it must be doubted whether this strategy of the IOM is sufficient.

How IOM uses the funds 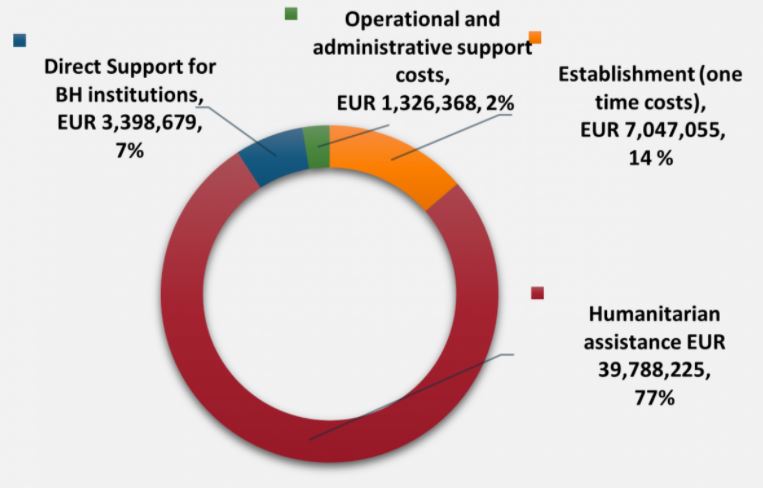 In this chart, IOM lists how funds have been distributed in Bosnia and Herzegovina so far.

14 % of the funds were spent on the creation or renovation of a total of seven camps in the canton of Una-Sana and the area around Sarajevo. This includes the installation of 562 containers in the camps Ušivak, Blažuj, Lipa, Bira, Sedra, Borici and Miral, as well as the reconstruction of the former student dormitory in Borici. In addition, approximately 5900 bunk beds, over 10,000 mattresses, 1300 heaters, 45 industrial washing machines and other equipment were purchased for the camps.Approximately 2 % will be spent on IOM administration, rooms and staff in the Sarajevo and Bihać offices.

Lack of transparency in the use of funds by Bosnian authorities

At €3.4 million, around seven per cent of the money went directly to Bosnia and Herzegovina's institutions. From the money, the police received new vehicles, drones, thermal imaging cameras and heavy protective equipment for counterinsurgency. However, after seeing with my own eyes the brutality with which the Canton police crack down on refugees, I have doubts about whether this is really the best use for the funds. In addition, the funds are being used to finance 25 employees of the Bosnian Foreigners Authority.

Unfortunately, it is not possible at present to obtain a precise breakdown of the use of funds by the Bosnian authorities. The Bosnian authorities are not providing a full report on this and are ignoring enquiries from journalists. This is not a very transparent way of dealing with European taxpayers' money.

The allocation of funds is monitored by a committee comprising representatives of the EU Delegation to Bosnia-Herzegovina, the Bosnian Ministry of Security, the border police, the foreigners' offices and several aid organisations. The Bosnian authorities, in particular, must explain where the money goes if they want to dispel doubts about the correct allocation of funds. 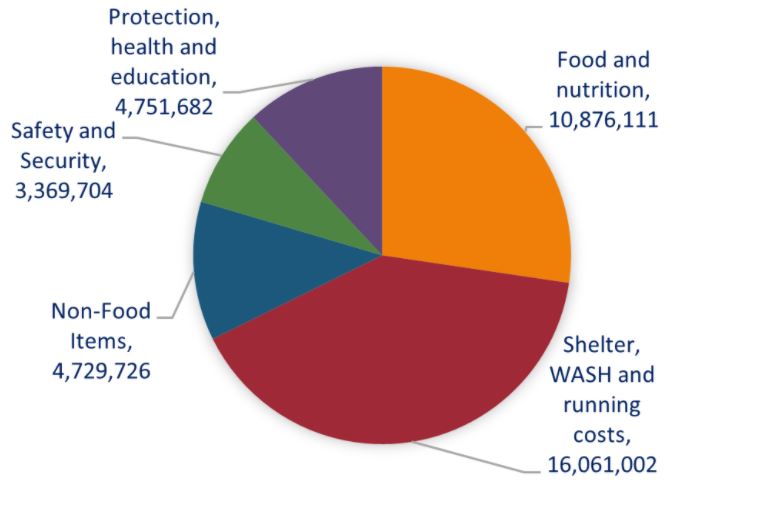 77 % of the funds spent by IOM so far went to the area of humanitarian aid. The more than € 16 million includes expenses for heating, water, garbage collection, maintenance, as well as the costs for IOM staff. IOM currently employs a total of 423 staff in the camps, 421 of whom are Bosnian nationals.

Almost €10.9 million was spent by IOM on the distribution of more than 8.2 million meals. In doing so, IOM collaborated with the NGO Pomozi.ba in Sarajevo Canton and the Red Cross in Una-Sana Canton.

For the purchase of goods for daily use, the IOM has spent a total of more than € 4.7 million for 1.6 million items. These are hygiene items such as soap and toothbrushes, but also sleeping bags, winter clothing or protective masks.

Another €4.7 million was spent on health and education. This area includes medical care and transport, as well as special protection for underage refugees and their schooling.

Another € 3.7 million was spent on security. The money also went to private security companies, which were much criticized by residents and NGOs for treating the refugees badly or simply not doing their job. Thus, despite the presence of the security guards, in May, a man was killed in the Ušivak camp. Funds were also used for fire alarms, fire extinguishers and first aid equipment.

The political problems cannot be solved with more money

However, despite all the justified criticism of Bosnia-Herzegovina, we must not forget why thousands of people are stuck there in the first place. Most of them have already been to EU countries such as Greece, where they were also treated inhumanely. And they want to move on, but they are being brutally and unlawfully beaten back by the Croatian authorities. The current terrible situation for refugees in Bosnia-Herzegovina is therefore also the fault of the EU states, and the Commission in particular must ensure that they finally comply with the law.

In the short term, better conditions for refugees must be created in Bosnia and Herzegovina, and it can be discussed whether more money can be used to help in one place or another. However, the fundamental political problem cannot be hidden under higher sums of money. We, as citizens of the European Union, must not accept that Bosnia-Herzegovina is being misused as a dumping ground for refugees and that they are repeatedly beaten back there.